Strong leadership has been a marquee component of Forward Sioux Falls’ success throughout the years. These visionaries promote the philosophy that we are stronger as a community if we work together to grow our economy.

This past February, we lost a giant among local leaders as Mark Shlanta, former CEO of SDN Communications and co-chair the Forward Sioux Falls 2011 and 2016 campaigns, passed away after a two-year battle with cancer at the age of 57.

The growth and success that we’ve enjoyed in Sioux Falls over the past decade is a tribute to the outstanding vision and leadership that [Shlanta] provided for our community and region.

First PREMIER Bank President Dave Rozenboom had the opportunity to co-lead the FSF 2016-2021 campaign with Mark and was impressed with his desire and ability to actively engage as many investors as possible within the various Forward Sioux Falls program initiatives.

“He knew that for Forward Sioux Falls to stand the test of time, we need to provide our investors with a “sense of ownership” in the work being done to establish and achieve the goals and objectives we’ve set,” Rozenboom said. “Mark always displayed a strong vision for the future and used a consensus-building approach on the best way to get there.”

Rozenboom added that as CEO of SDN Communications, coupled with his extensive community leadership roles over many years, Mark had a unique and comprehensive view of the past, present and future of Sioux Falls. “Mark earned the trust and confidence of a deep and wide network of business, education and community leaders and was uniquely qualified to be the face and voice for Forward Sioux Falls during his time of service as the Chair of the Joint Venture Management Committee and co-chair of two campaigns. The growth and success that we’ve enjoyed in Sioux Falls over the past decade is a tribute to the outstanding vision and leadership that he provided for our community and region.”

Vernon Brown, SDN Communications Vice President of Marketing and Community Relations, worked alongside of Mark for 20 years. He said that one thing that set Mark apart from others as it relates to leadership, was his humility.

“Mark always provided a leadership path, but he was the first to say, ‘That’s just what I’m thinking, and I’m a focus group of one.’ He wanted perspective and options that might lead to a better result. He also was never afraid of mistakes because he knew we could learn from them,” Brown said.

Brown said Mark’s affinity for our community resulted in becoming actively involved. “Mark loved Sioux Falls. He and his wife, Peggy, chose to raise their four sons here. And what they choose, they also support in time, talent, and treasure. As much as Mark loved the broadband industry, economic development for Sioux Falls was also very close to his heart.”

SDN CEO Ryan Punt said that Mark’s legacy as a Sioux Falls business leader was immense. “Mark’s presence and influence was felt in any environment and his involvement and leadership in Forward Sioux Falls were extremely important to him.”

Punt stressed that Mark had the mindset of doing what was best for our city and state whenever making critical decisions. “I think all of this led to Mark being highly respected and valued by many business leaders not only in Sioux Falls, but across our state. To me, this is what legacy is all about.”

In addition to Mark’s astute business acumen, his passion also included helping those in need. He generously gave time, talent and resources to organizations including, but not limited to: Boy Scouts of America, Junior Achievement, The Banquet, Bishop Dudley House, Sioux Empire United Way, Feeding South Dakota and Garfield School. “Even in Mark’s passing, his ask as a memorial was to volunteer in a manner that supported the less fortunate or causes in our community that need our support and compassion,” Punt said.

According to Punt, Mark also inspired and challenged SDN employees to be involved. At SDN, events such as golf tournaments and all-employee meetings incorporated fundraisers that supported non-profits as well. “This was all started by Mark and will continue under my leadership, because it is impactful and provides so much purpose to all involved.” 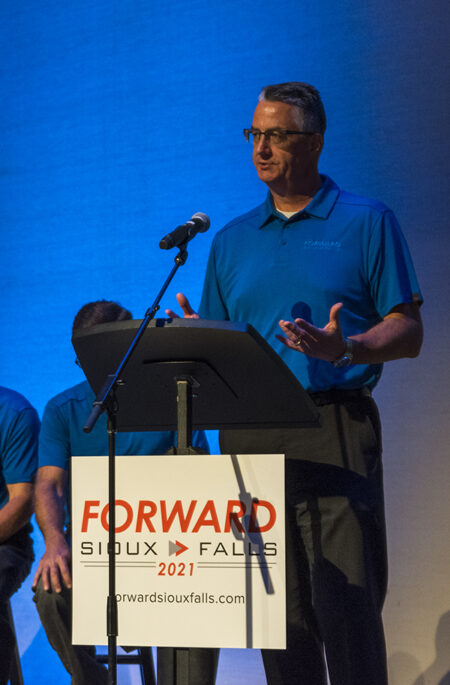 Former Greater Sioux Falls Chamber of Commerce President/CEO Evan Nolte said that Mark’s leadership style was that of a true servant leader. “He always listened to the views of other leaders carefully, but he also was very effective at communicating his specific vision for Forward Sioux Falls to successfully address the very significant economic and quality of life issues and opportunities facing the community and region.”

Nolte had frequently met with Mark—along with other Sioux Falls business leaders—to develop Forward Sioux Falls’ programmatic and implementation strategies. During one of these meetings, Mark quietly announced at the beginning of the meeting that he had already begun working to provide options for the new program. “He passed out a detailed matrix for multiple elements of the proposed program—that was Mark! It was a work of art and I still have a copy of it carefully filed away for reference.”

A great person who was totally committed to his family and a highly professional business and technology leader, Nolte said he “will never forget him, his passion and commitment for the community and State of South Dakota.”